I’m sure that about this time last year I wrote about the term we had just had and here we are again. It’s difficult to express my pride and admiration to each of you for the enormous efforts that have been made to seamlessly move to remote learning and back again. I am only too aware of the burden that has been placed on families through separation, income and work changes. On top of that helping your sons and daughters with home learning as well as meeting your own family and employment needs has been a massive effort.

I am grateful to our staff who have worked well and truly beyond their limits to design and provide learning activities which not only matched their programmed curriculums but were challenging and interesting for their students as well. Many long hours were spent making sure we were well connected and on track. Thank you all so very sincerely.

This remains a time in our lives which will be marked as unprecedented and historical. Indeed I read recently that the COVID 19 situation is a “cataclysm” in our stories. In this way we have deliberately tried to be positive in our framing, our communications and our remote learning. It is a time where families can leave behind the mantra of being “busy” and be together, at home with time to focus on the simple things which we may have left behind.

It was lovely to feel the energy return to school this week, albeit with Level 3 restrictions in place. It is a clear reminder that schools are about people, about connectedness and about pastoral care. When all those things are set academics will come. I am aware that a number of students and families are anxious about the future and I can only reassure you that we are doing all we can to stay safe and minimize risk. Please do not hesitate to reach out if your family needs support or advice.

More information will be supplied as it comes although I can’t see much changing in terms of restrictions as we begin next term. Sadly that means that all excursions and activities have been cancelled for 4th term as restrictions will not allow us to travel. Details will come about refunds etc as we get to that.

Canteen will be operational next term as usual. We will work on staggering times so that cohorts are mixing as little as possible. Again information will come as we have it.

We move to Compass Parent Portal over the break. I know many teachers and parents used Compass for emails during Remote Learning so it is familiar. Details will be sent home about usernames and passwords as well as setting up the Compass app on your devices.

Thanks to those parents who continue to pay their fees via direct debit. In terms of budgeting and finance for us all this steady stream of income makes things easier. I encourage all who are able to take up this option to keep on top of our fees and payments. There is a handy calculator on the website to estimate fortnightly payments and Trish in the office is always happy to work with you to set things up as needed.

Please enjoy a break in the holidays. Please take particular care of your sons and daughters and encourage some “screen free time” over the break. 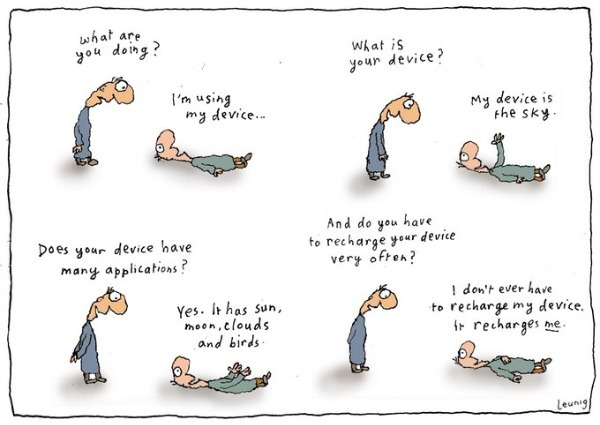 Mary our Mother… look after us.

Compass will be our main platform for communication from Term 4 so we strongly encourage ALL families to please download the app onto your smartphones.

Compass is where all parents will be able to add attendance notes, communicate with teachers, view calendar for events and much more.

The portal is accessible via the web https://schools.compass.education/ and the Compass School Manager App (via the App store on your device). Once you have downloaded the App, you will need to:

As restrictions have been lifted, the celebration of Mass resumed last weekend.

Please be aware that there is no singing during Mass, face masks must be worn and that social distancing is required. 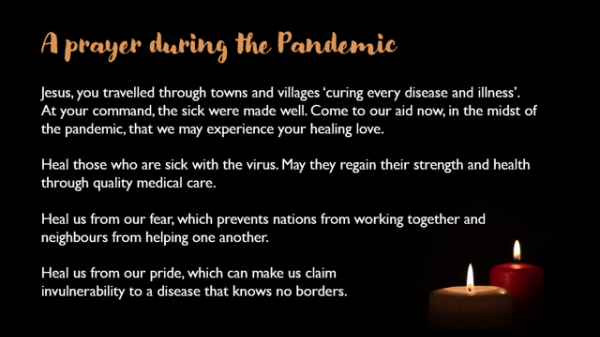 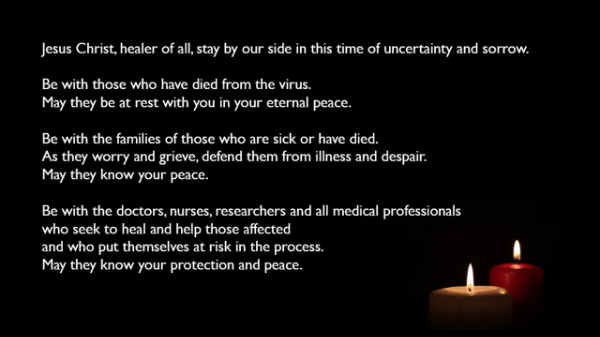 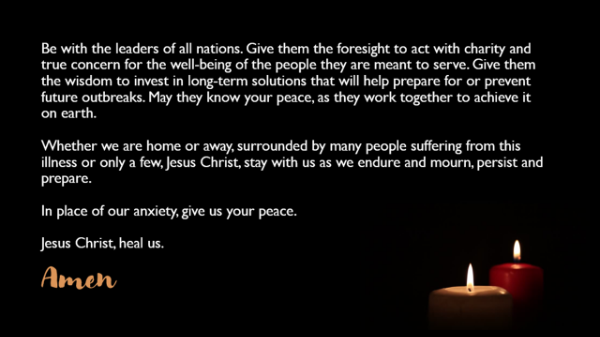 Each term McAuley focuses on a role model to highlight a Mercy value. During Term 3 our Role Model has been Eileen O’Connor, known as ‘Little Mother’.  She was an Australian Catholic and the co-founder of the Society of Our Lady's Nurses for the Poor (1913) – also known as the Brown Nurses – committed to providing free nursing services to the poor-visiting the sick in their homes and nursing the frail and the elderly.

'The cause of a person’s poverty is not yours to question. The fact a person is poor is the reason you help.’

Eileen became a Servant of God in August 2018, which is the first of four steps towards sainthood.

On 17 August 2018, the Archdiocese of Sydney announced:

“Australia is one step closer to getting its next saint with the Vatican advancing the cause for Sydney woman Eileen O’Connor to the title Servant of God.

“The significant announcement comes just months after Catholic Archbishop of Sydney, Most Rev. Anthony Fisher OP, began the formal process for the beatification of Eileen when he appointed Rome-based priest, Father Anthony Robbie, in March as postulator – the person who guides the cause for beatification or canonisation through the Church’s rigorous processes for recognising a person as a saint.

“Eileen’s was a life of immense suffering and judged by today’s standards many would have viewed it as lacking in dignity, value or hope,” said Archbishop Fisher.

“That she is on her way to possibly being our next saint shows even a short life, marked by incredible suffering, can be an inspiration to all and reminds us of the dignity of every human life.”

Eileen died on 10 January 1921, aged just 28 years her legacy – the mission of Our Lady’s Nurses for the Poor over the past 100 years – ranks among the great and enduring social works of Caroline Chisholm and Saint Mary MacKillop.

In 2017, Most Rev Anthony Fisher OP, Archbishop of Sydney, approved the following prayer for the beatification of Eileen O’Connor:

through the maternal love of the Blessed Virgin Mary,

you inspired your servant Eileen O’Connor,

to care for the sick and dying poor and to serve your Church through spiritual and corporal works of mercy.

Listen graciously to our prayers and grant that Eileen may be raised to the glory of your altar.

We ask this through Christ Our Lord. Amen.

Each month of the liturgical year is devoted to a particular Catholic tradition, usually focused on a Feast during that month. The Church dedicates the month of September to Our Lady of Sorrows.

The Seven Sorrows devotion involves praying seven Hail Marys a day, each one while meditating on one of Our Lady’s seven sorrows, which are:

Our Lady of Sorrows commemorates the seven great sorrows which Mary lived in relation to Her Son, as they are recorded in the Gospels or through Tradition.

The Seven Sorrows devotion involves praying seven Hail Marys daily, each one while meditating on one of Our Lady’s seven sorrows.

REFLECTION ON A FRIENDSHIP AT MCAULEY

Reflection on Friendship At McAuley
As we return from remote learning, it is lovely to see the students and staff enjoying each other's company and spending time together, even though we are all social distancing! Friendship is such an important element in our lives. Having good friends who you trust and support you for who you are, is really important for our happiness. The most important thing is your friends’ acceptance of you for who you are. A good friend walks the talk and shows that they care by their actions - big and small.

Saint Paul wrote a famous passage about love, which is often used at weddings. We can reflect on those words, but mentioning 'friends' instead of 'love':

Friends are patient and kind;

they are not jealous or boastful;

they are not arrogant or rude.

Friends do not insist

on having their own way.

They are not touchy or resentful.

when things go wrong for others,

but they are pleased

with what is good and right.

Friends are always ready to excuse,

to believe the other person,

and to stand beside their friend

in bad times as well as good. 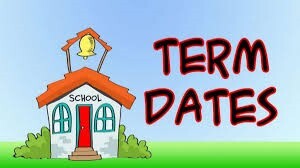 Congratulations to Clay, Judah, Bonnie, Evelyn and Ashley in Kindergarten who have reached the ‘Bronze’ level of our Student Welfare System. To gain a Bronze Award Clay and Judah have achieved 10 Mercy Awards for exhibiting our McAuley Mercy values. 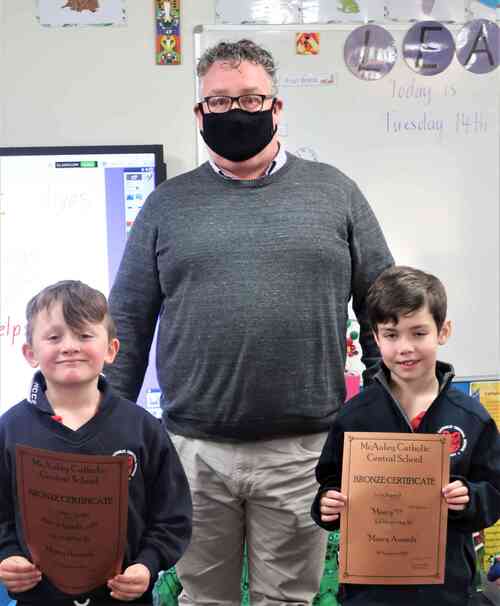 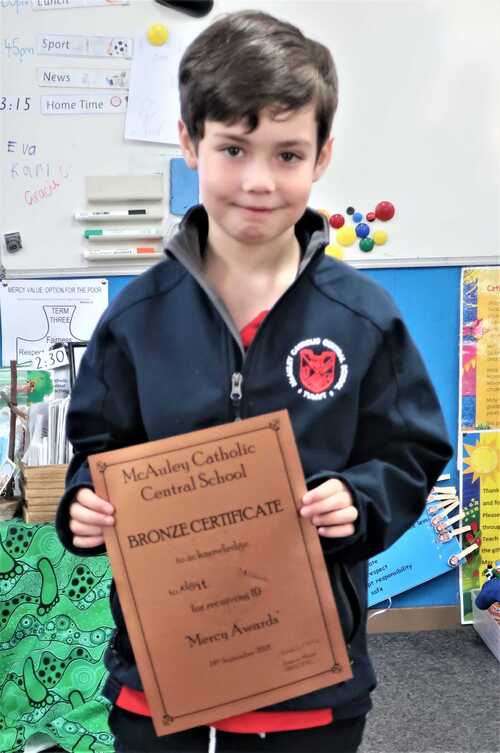 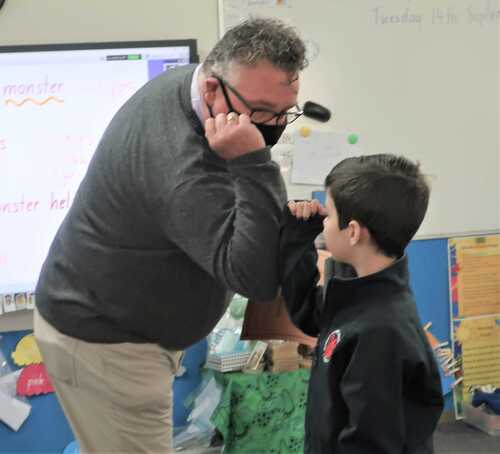 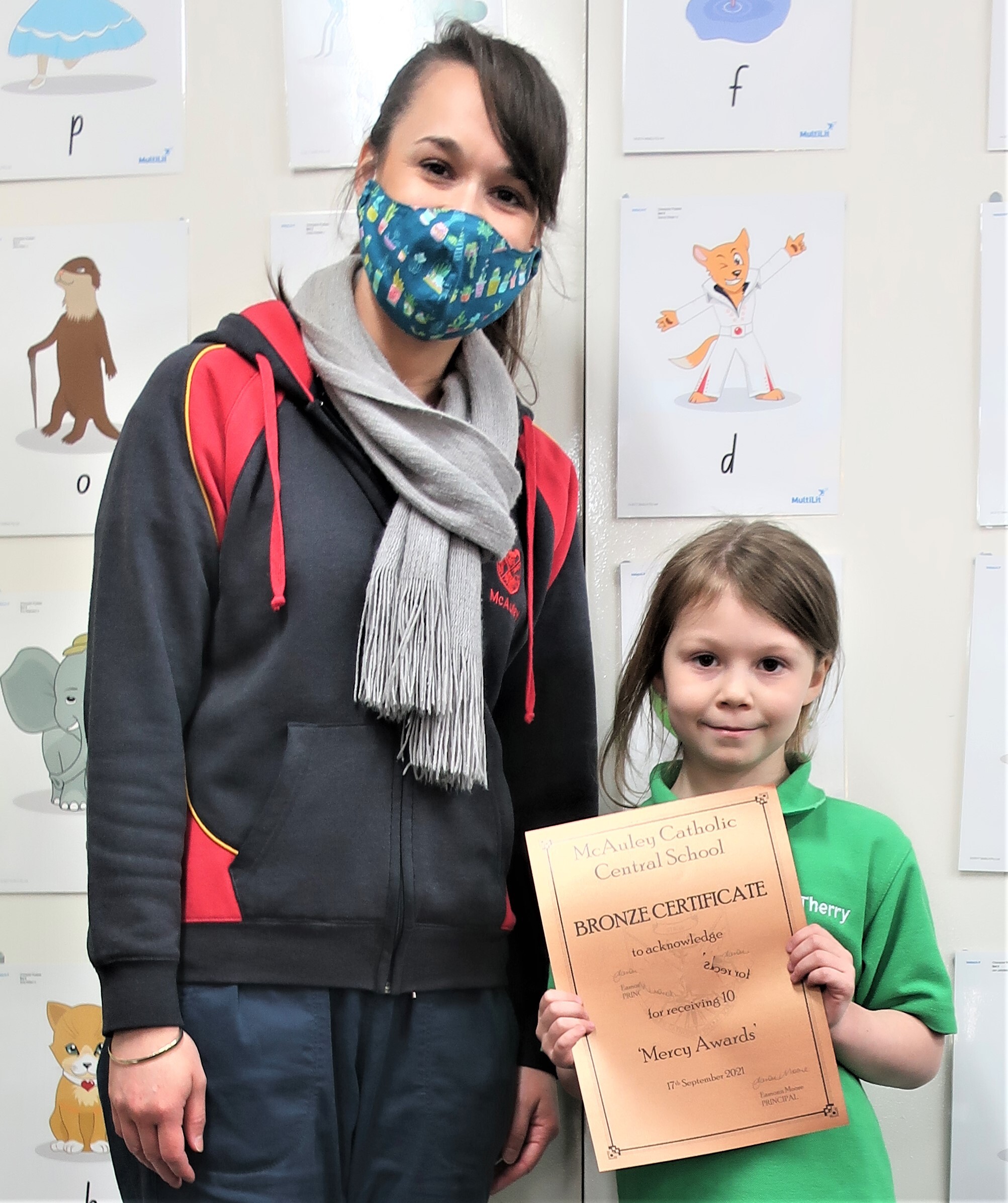 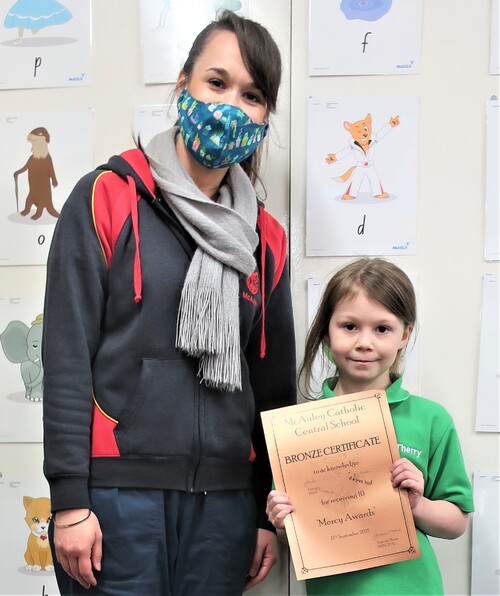 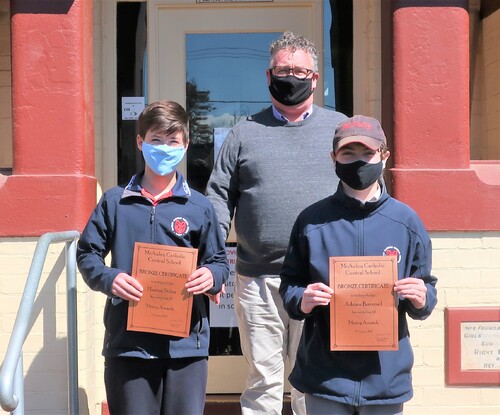 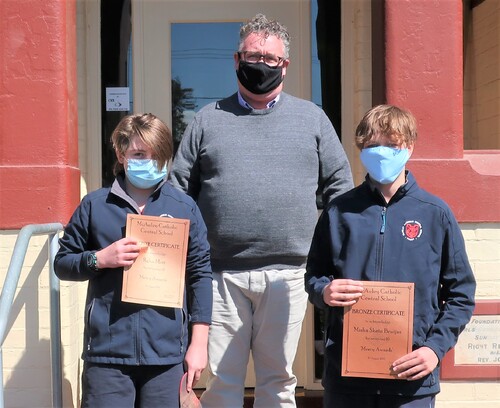 The children will guide you as you go out into the world.

We will welcome their enthusiasm.

We will welcome their questions.

We will welcome their friendship.

We will welcome their trust.

We will welcome their joy in community.

We will welcome their acceptance.

We will welcome their essential hopefulness.

We will welcome their sense of what is just.

We will welcome their care for the environment.

With the eyes of a child, you will see the way ahead clearly.

Students in Years 3, 5 , 7 & 9 were given their NAPLAN 2021 results this week. There is a guide on the results explaining the bands and some detail regarding your child's result. If you should have any questions regarding these, please do not hesitate to contact the school.

The Canteen will return in Term 4, commencing on Wednesday, 6th October.

Thank you to all of our volunteer parents, we really do appreciate you!

Please see below the Canteen Roster for Term 4 as well as the Canteen Menu for Term 4. (Please note there are some price changes)

Payments can be made by using BPay (reference is on your statement) and via the Qkr! App. Term 3 Ends for all Students

Study Tips from 8 International Experts - 11 sessions over one day...

Get all the tips, tools and techniques to make your (or your student's) study effective and produce the passing marks/grades you really want.

Get your FREE ticket HERE

Click here to watch a 1-minute video from each speaker...

All are welcome to a free, online, one day gathering of Teams (a worldwide Catholic movement promoting married spirituality) Saturday 18 September 2021. Hear stimulating talks from a range of local speakers on Supporting Couples. Enjoy the opportunity to meet other participants and provide feedback.

For more details see www.teamsoceania.com.au or contact Tim Power on 0437 013 328. Register at https://bit.ly/TeamsRego

ACTIVITY IDEAS FOR DADS AND KIDS

We thought this might help during a challenging time for both schools and families.  The fathering project are offering one of their highly regarded resources for free just in time for the school holidays. The dads and kids’ activity ideas booklet can be downloaded now. Inside there are 20 low or no cost activities for families to do together at home. 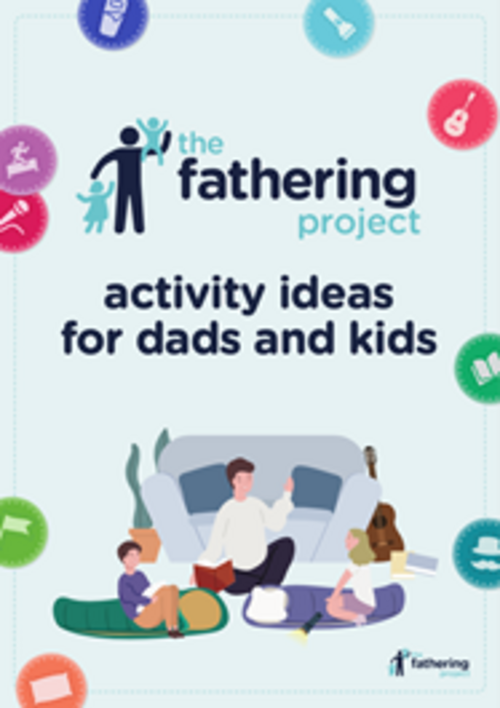 Click here to request your FREE resource
The Fathering Project is a secular, research-based, not-for-profit organisation that provides programs, resources, and events specific to the engagement style of fathers and father figures. We’re part funded by the Commonwealth Government and currently partnering with hundreds of Australian schools to build communities of positively engaged dads for the benefit of their families.

Please find attached the Calendar for Family Skills programs for Term 4. Individual referral forms for each program will be sent prior to the start date.

Should the region be locked down or restrictions tightened at any time, programs may have to re-schedule accordingly. Participants and referrers will be advised.